27Dinner Cape Town happened. Awesome it was to see old faces, many new faces and to welcome the tourists🙂 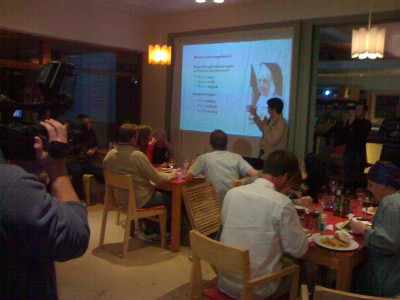 First off we had Flow Interactive’s Phil Barret(UK) do a talk about my granny and nuns using the Internet.

Then Randolf Jorberg (Germany) went on about the wonders of affiliate marketing.

Randolf Jorberg, whoÃ¢â‚¬â„¢s been known in the german-speaking part of the Internet as Ã¢â‚¬ËœgulliÃ¢â‚¬Ëœ since 1998, when he started a website that soon turned into one of the Top100 german Websites.
IÃ¢â‚¬â„¢ve been living with and on the internet for close to ten years and I feel confident that there arenÃ¢â‚¬â„¢t too many other experts with a comparable knowledge on internet marketing and the online world in general.

IÃ¢â‚¬â„¢m currently living in Cape Town (South Africa) as well as in Bochum (Germany) and switching back and forth.
While having an established internet company (fliks it-solutions GmbH) in Germany, Bochum, in the middle of GermanyÃ¢â‚¬â„¢s biggest urban area (the Ruhrgebiet) IÃ¢â‚¬â„¢m looking forward starting a new enterprise here in Cape Town. Seeing differences as well as similarities between these two markets in development and the leading US-market on the contrary, shows me many options, where their future is headed to.

The Germans & English are number one and two on the list of tourists who visit Cape Town the most. Hope you guys enjoy your stay. Judging from Randolf’s facebook status at 4.01am on a Monday morning, he is.

Randolf Jorberg is SA rocks, but I really need to get my work done this week….

The *Camp (StarCamp if you’re dealing with something that doesn’t allow the ‘*’ character) is a self-organising not-a-conference in the spirit of BarCamp. There is no cabal deciding who gets to talk and on what – anyone can attend, and everyone who attends is strongly encouraged to offer to talk. While there may be particular streams (“GeekCamp”, for example) that some might be primarily interested in, the option is there to catch a talk on another stream, or just hang out.

The *Camp builds on the 2006 BarCamp Cape Town, the GeekDinner movement started post-BarCamp Cape Town, and the 27dinner phenomenon of finding new ways to get people together to learn from each other and to learn _of_ each other, to help build Cape Town as a leader in business and technology.

PS: Thanks to the Garden Route (stii, belinda, charlvn, jayx) massive for pulling through.

👐getsmarter’s UCT SEO Short Course To achieve said result took a decade of working and learning in the SEO trenches almost daily and of course of subscribing…
👐Let’s Explore Barcodes: Types, Uses and Characteristics. When it comes to barcodes South Africa has many different forms and every one of them has its own exclusive symbolism and…
👐2018: The 👐Bitcoin👐 Present. Future-Past Using ideas and lessons from the past, building technology in the present, Web AddiCT presents his idea for Bitcoin’s inevitable future. The…
Your are the first person in your social graph to know! Share it with your wwworld now 🗺️
Facebook0
Google+0
LinkedIn0
Twitter0
Support Web AddiCT(s);