The latest spin-off from Cern, the particle physics centre that created the web, the grid could also provide the kind of power needed to transmit holographic images; allow instant online gaming with hundreds of thousands of players; and offer high-definition video telephony for the price of a local call.

David Britton, professor of physics at Glasgow University and a leading figure in the grid project, believes grid technologies could “revolutionise” society. “With this kind of computing power, future generations will have the ability to collaborate and communicate in ways older people like me cannot even imagine,” he said.

By contrast, the grid has been built with dedicated fibre optic cables and modern routing centres, meaning there are no outdated components to slow the deluge of data. The 55,000 servers already installed are expected to rise to 200,000 within the next two years.

That network, in effect a parallel internet, is now built, using fibre optic cables that run from Cern to 11 centres in the United States, Canada, the Far East, Europe and around the world. 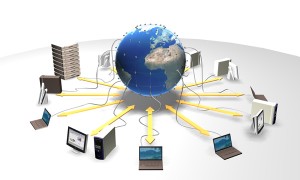 The Grid has actually already been around and in the making for the past 7 years. At the moment, just like the first time the Internet came into existence, The Grid is mainly used for scientific purposes, research and academic institutions, but that will soon change I believe.

When will this be available to us, the public? Well that’s the question, isn’t it? However, looking at the original Internet and World Wide Web invented in 1989, which took less than 10 years to reach a massive global audience. Nowhere near it’s full potential, true, but it was publicly available to most people.

If we follow that new technology is reaching mass markets at increasingly rapid rates, and that the Grid will be running on exisiting fibre optic cables. I think we should be seeing “The Grid” stating to really pick up in the next 5 years or so.

This would be a really exciting period for Web Entrepreneurs and could open massive doors of potential in, among other things, Communication, Entertainment and Commerce.

As an aside. today is CERN’s Open Day, so where anyone can go and have a look at their amazing s Large Hadron Collider (LHC), the world’s most powerful particle accelerator. if you can’t be there though, which if you’re reading this you probably can’t 😛 You can still watch the live webcast of the show at the Globe of Science and Innovation

👐2018: The 👐Bitcoin👐 Present. Future-Past Using ideas and lessons from the past, building technology in the present, Web AddiCT presents his idea for Bitcoin’s inevitable future. The…
👐Track Bitcoin & other Cryptocurrencies with 22seven I’ve posted about the awesome financial app 22seven many times before and today they’ve announced the ability to track your Bitcoin and…
👐Learn Affiliate Marketing & Cryptocurrency Simultaneously We’ve recently covered Bounty Campaigns in Digital Marketing and how Social Cognitive Theory applies. Now you have an opportunity to learn about…
Your are the first person in your social graph to know! Share it with your wwworld now 🗺️
Facebook1
Google+0
LinkedIn0
Twitter0
Support Web AddiCT(s);