After years of watching and sharing hundreds of TED talks and being fortunate enough to be accepted as  a TED Fellow in 2007. It’s time to get your TED on at TEDx Cape Town 2011. The TEDx event will be held at Ratanga Junction on 16 April 2011.

In the spirit of ideas worth spreading, TED has created a program called TEDx. TEDx is a program of local, self-organized events that bring people together to share a TED-like experience. Our event is called TEDxCapeTown, where x = independently organized TED event. At our TEDxCapeTown event, TEDTalks video and live speakers will combine to spark deep discussion and connection in a small group. The TED Conference provides general guidance for the TEDx program, but individual TEDx events, including ours, are self-organized.

For more info, to see the proposed programme, list of speakers and to apply to attend visit TEDX Cape Town .org.

On another TED note…

TED announced today at SXSW that it is opening all of its online talks to the public. An application programming interface (API) will allow open access to all talks and associated data (topic, location, speaker, etc.) for developers who might use that info to build all sorts of tools and applications.
Speaking before her announcement at TED, June Cohen, Executive Producer of Media for TED, told Fast Company that in keeping with the organization’s promise of transparency, “The natural next step is to open up content to the developer community…. Every time we’ve allowed people to contribute, people have surprised and humbled and delighted us.” More to the point, she says, “We know we don’t have the monopology on good ideas.” 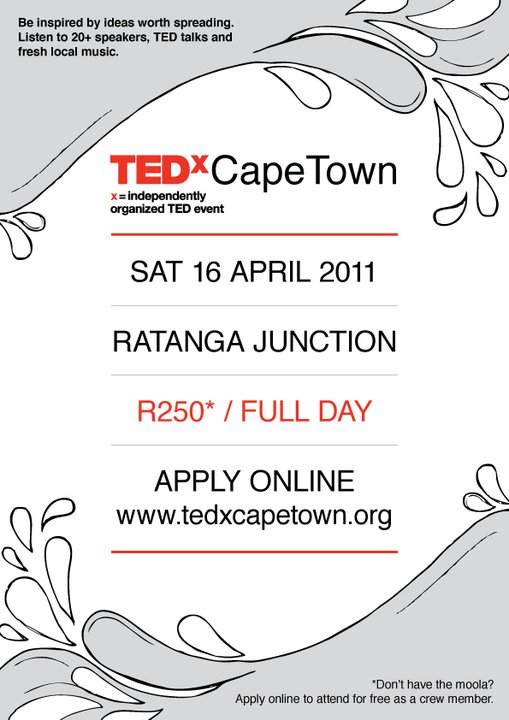 👐PayFast Ecommerce Virtual Summit I am excited to announce that I’ll be speaking about The 5 Must Have SEO Tactics for Every Online Seller at SA’s…
👐The jfGi.cc Origin Timeline (updated) This is a journey of multiple ideas spanning from the origins of the first chatbot spearheaded in 2007, ideating and the creation…
👐What Lies ahead for South African Personal Finances in 2018? 2017 has been a year to forget in terms of the financial wellness of many South Africans ,who didn’t buy bitcoin or…
Your are the first person in your social graph to know! Share it with your wwworld now 🗺️
Facebook2
Google+0
LinkedIn0
Twitter0
Support Web AddiCT(s);