If you watch any youtube reviews of the current leading smart phones on the market, or read an article in the news profiling any of the top devices, the everlasting debate about which mobile OS is superior, tend to elicit some kind of reaction of: “operating system x is better than y because of such and such, therefore it’s the best”. Perhaps, from a satisfaction point of view, what if x (IOS) was better than y (Android) and the rest (Windows Phone and RIM)? Surely, that wouldn’t go too well with enthusiasts. But then again, what if it is incidentally, empirically proven?

Take a look at the following chart 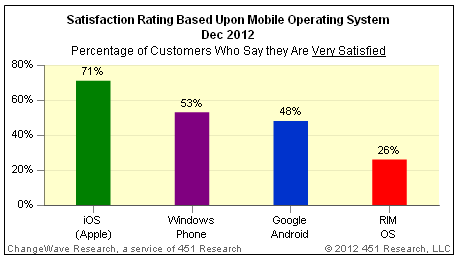 if this was a popularity contest, Android would surely be at forefront, with more Android activations than the number of babies being born, but unfortunately for Android, popularity and satisfaction are two different factors.

It also seems like larger smart phone screens are in demand. According to the same research, 52% of respondents were interested in buying phones with screens between 4 to 4.9 inch screens, while 27% were interested in 5inch and above. 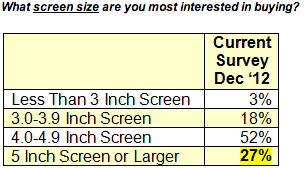 While it occurs regularly that most reviewers in the media seem to have their own unofficial decree about which mobile OS is the best, quite often it is largely a result of their personal sentiments — However, the data tend to paint a totally different picture.

For a comprehensive analysis of the results  of the Changewave research, find out more here, but before that, let’s run our own mini Web AddiCT’s poll. Tell us in the comment section, which mobile OS are you running,  and if you are ‘very satisfied’ with it?

👐Is The Future of SEO The Future of User Interface & UX Design Too? IMHO: The Future of SEO is AI & Voice. In the same way that The Future of UI & UX Design is Search…
👐How technology is reshaping the apartment renting experience When was the last time you poured over the newspaper’s classified section looking for a place to rent or delivered a lease…
👐The best cloud storage options to keep your photos safe We can all relate to what it feels like to lose the only copy of photos we’ve been collecting over the years.…
Your are the first person in your social graph to know! Share it with your wwworld now 🗺️
Facebook4
Google+0
LinkedIn0
Twitter0
Support Web AddiCT(s);