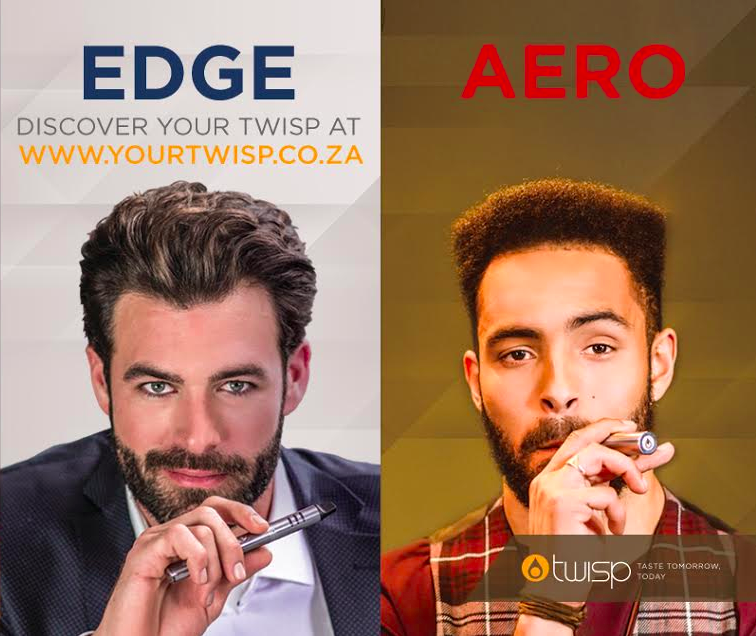 I’ve been addicted to the web longer than I have been to cigarettes. The one addiction has been beneficial while the other has cost me lung capacity and a shortened lifespan. Something has got to give and it’s got to be the expensive cigarettes. Therefore I’m now using the Twisp Aero to help get me off the cigarette habit. The Twisp Aero is an electronic cigarette touted as the smoking alternative. The Aero is one of 3 new electronic cigarette designs introduced to the South African market. The other 2 are The Solo and The Edge.

Visit http://goo.gl/aUqVbb to see all 3 of the Twisp devices in action with different videos to suite your vibe. I prefer the Aero due to its long lasting battery and the ability to control the flow of vapour when I inhale. Check it out for yourself and try using the keyboard to toggle between the 3 with A, S and E. They are also running a comp so you could win your own.

After about a week of twisping away at 3 or the many different flavours available, namely Tobacco#1, Vanilla and Cherry, I’ve still been getting my nicotine fix with less harmful chemicals than normal cigarettes. The flavours reminds me of smoking hubbly bubbly without all the effort. If my math is correct it may actually even be cheaper to Twisp than to smoke normal cigarettes over an extended period of time when you factor in the upfront cost of the device itself. I haven’t been using it long enough actually know if this is true or not. One refill of the smoking liquid lasts me about 2 days before having to refill again. I’ve tried to treat the Twisp like I would a normal smoke by only twisping for 5 minutes when I feel the craving for a normal cigarette. I haven’t kicked the traditional cigarette habit yet but have been smoking a whole lot less. After smoking for over a decade I guess kicking the habit will take a little longer than few days. Guess the true test will be how my lungs feel after going for a run.

Have you tried the Twisp electronic cigarettes yet and has it gotten you off traditional cigarettes?

👐The Advantages and Disadvantages of Laser Cutting Learn about the Pros and Cons of Using Laser Cutting Machinery It is hard for modern production to function properly without the…
👐getsmarter’s UCT SEO Short Course To achieve said result took a decade of working and learning in the SEO trenches almost daily and of course of subscribing…
👐How technology is reshaping the apartment renting experience When was the last time you poured over the newspaper’s classified section looking for a place to rent or delivered a lease…
Your are the first person in your social graph to know! Share it with your wwworld now 🗺️
Facebook0
Google+0
LinkedIn0
Twitter0
Support Web AddiCT(s);